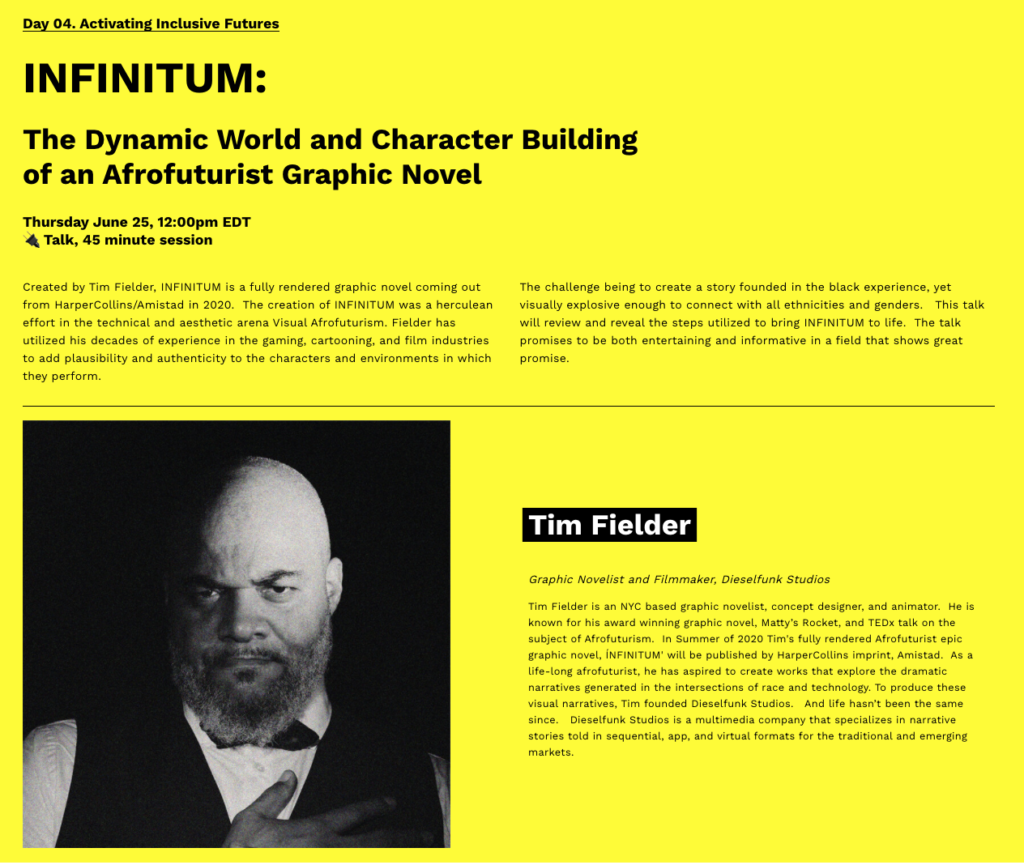 This Talk is a very huge deal for Dieselfunk Studios.  The primary characteristic being that we go through the process of how we create Visual Afrofuturism.  There’s so much about SHOW in this business that one rarely gets the opportunity to go into the TELL part.  A big thanks goes out to The Design Futures Initiative and my partner in crime Jim Fielder, maestro behind BlackPi Studios.  Enjoy! 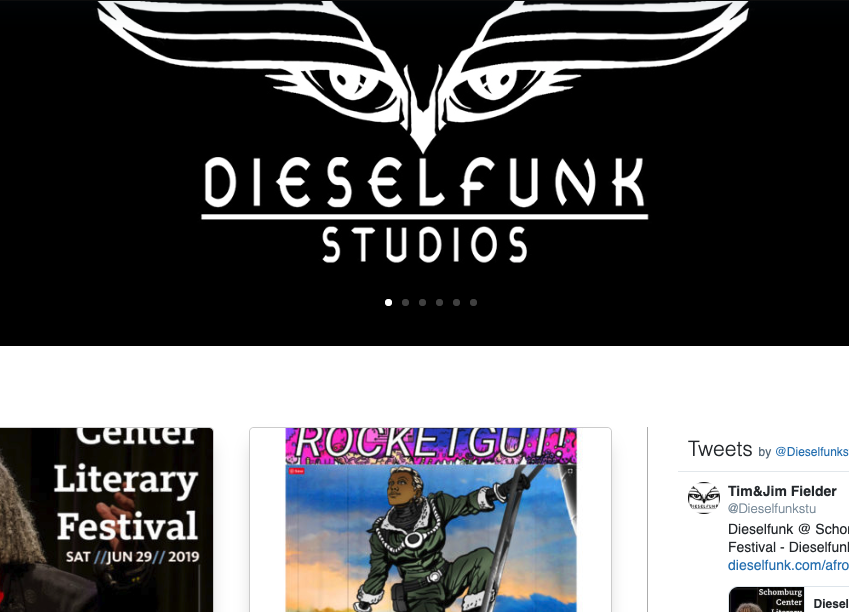 GREETINGS DIESELFUNKATEERS!   WEBSITE RELAUNCH!  As those that know can attest, I have many initiatives that I undertake.  We are believers that if mugs see something, it’s REAL to them.  We apply this philosophy towards presenting our work in the best possible light.  Perfection is not the goal. Iterative Improvement is the goal.  After months of planning we have relaunched the Dieselfunk Studios website.

Some elements look the same while other sections are brand new.  Plus we’ve added some elements under the hood.  Quick features are a nice social media feed to always ensure that there is new content on the site.  Additionally, there are new project pages for Matty’s Rocket, and our up and coming release, INFINITUM.  More updates and tweaks will be coming as the days and weeks go on. 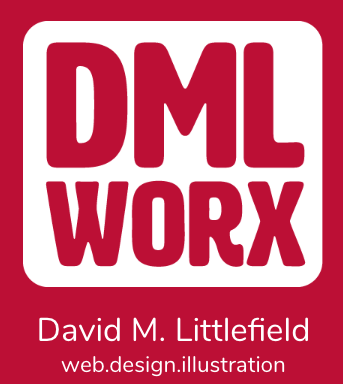 We have had the pleasure of working with Webmaster David M. Littlefield, aka DMLWORX to construct a site that very much employs the ‘Dieselfunkcosphere’ idea that all things Dieselfunk must be integrated and accessible.  He has experience in many areas of design, web creation and virtual experience.  Just a few samples of work he’s done… 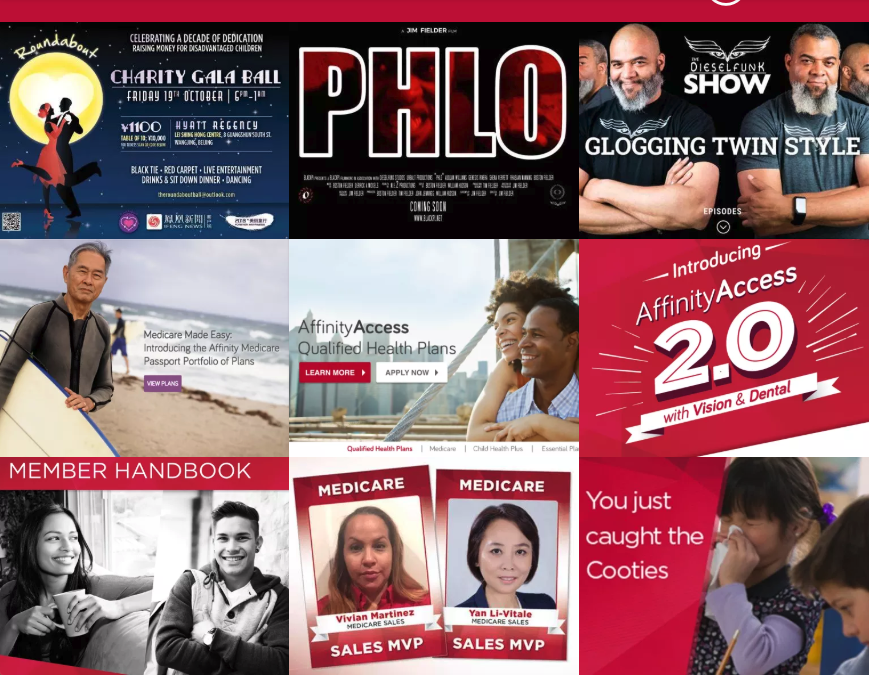 If you need webdesign, this cat is a viable option.  As a personal endorsement, Dmlworx built my first website back in 2001.  Plus he’s a hell of an INSTAGRAM PHOTOGRAPHER! So there you go! 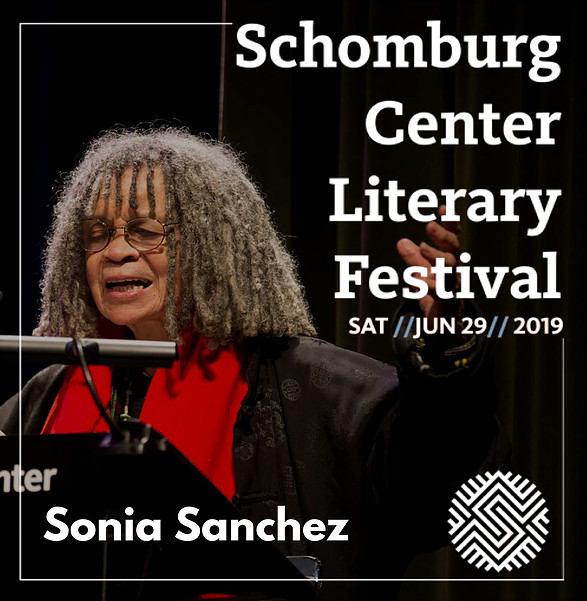 GREETINGS DIESELFUNKATEERS!  TODAY we will be presenting at:

Come on through as we have a few more MAJOR ANNOUNCEMENTS around 2pm in store.  Back to it!

More Info from The NY Times:

SCHOMBURG CENTER LITERARY FESTIVAL: READING THE AFRICAN DIASPORA at the Schomburg Center for Research in Black Culture (June 29, 10:30 a.m.-6 p.m.). This free festival, the first of its kind for the Schomburg, will be a bit of a diaspora itself: It will occupy not only the center’s building, but also the block of West 135th Street between Malcolm X Boulevard and Adam Clayton Powell Boulevard. Although not created expressly for children, it will offer author appearances, workshops and activities for readers from preschool through high school. The outdoor programs, which will take place rain or shine, will include live musical storytelling, in which readings of children’s books will have sonic accompaniment; and a daylong Little Readers Zone, where participants can make bookmarks, write haiku and, at 4 p.m., learn how to draw comics from the author and artist Tim Fielder. The panel YA Is Lit will feature young-adult authors discussing their work, and the Brooklyn Slam Team will host a performance by teenage poets. (Writers ages 13 to 18 can sign up at the event.) The slam team will also lead a workshop indoors at the Schomburg, where a children’s book reading will be held as well. (The website has details on times and locations.)
917-275-6975, schomburgcenterlitfest.org 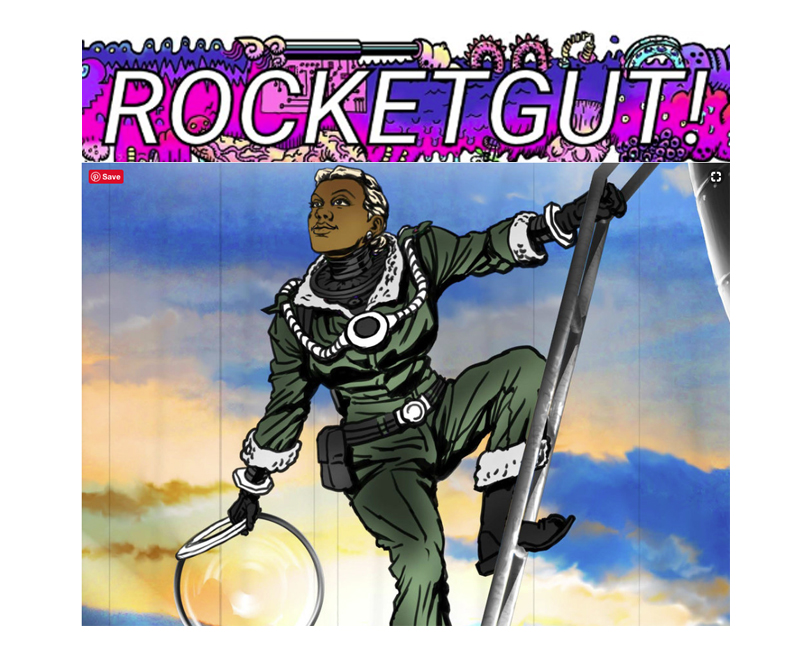 A CONVERSATION WITH TIM FIELDER, CREATOR OF ‘MATTY’S ROCKET’
Taking a quick sec to raise my head up from the Cintiq.  I had the pleasure of being interviewed by ROCKETGUT!

ROCKETGUT! is a space, art and culture website by Jason Davis and Porter McDonald.  We covered my beginnings in the south and my journey out and back into comics culminating with Dieselfunk Studios. 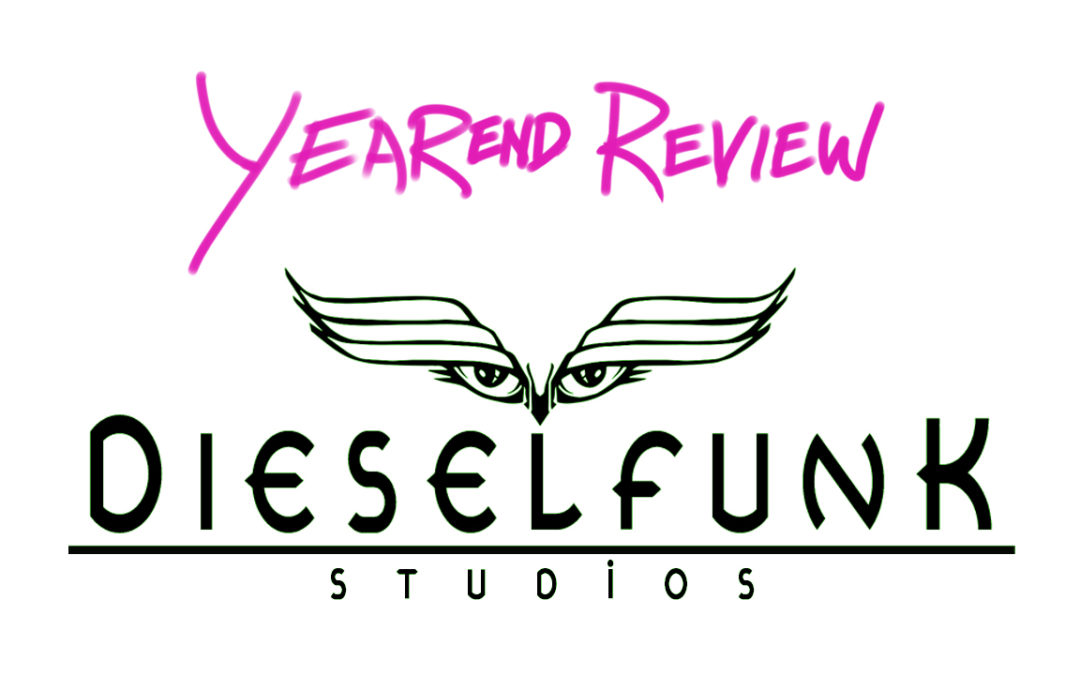 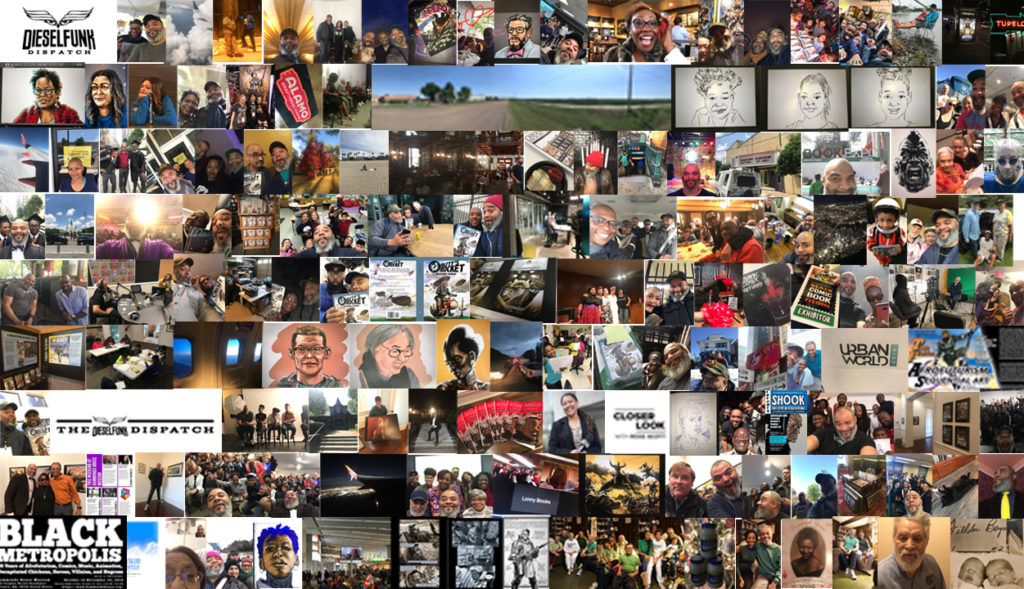 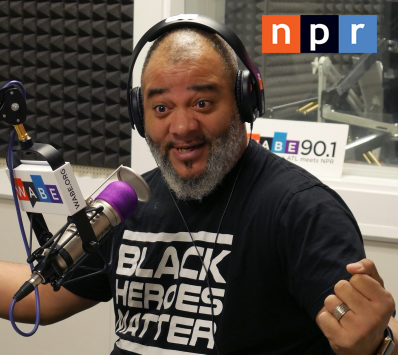 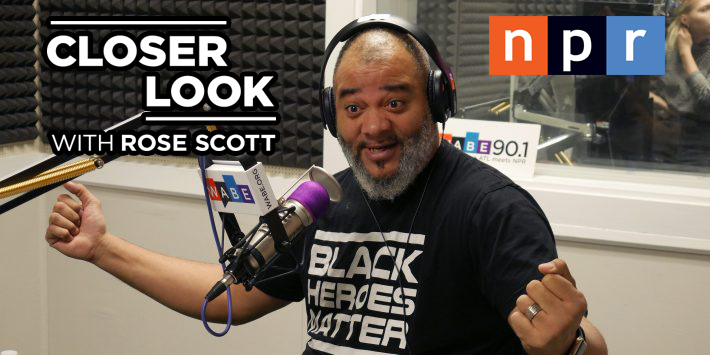 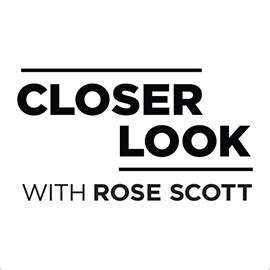 We talked about Afrofuturism and my experience.  Also, special tip: on the site you’ll see a preview of INFINITUM.  As an artist I have longed to be recognized for my work on a deeper level.  For me, this extends beyond the borders of the comic industry into the deeper community at large.  To achieve this goal I have my ‘goto’ outlets, one of which was always to be interviewed by National Public Radio.  This wonderful experience was conducted by the Great Rose Scott. 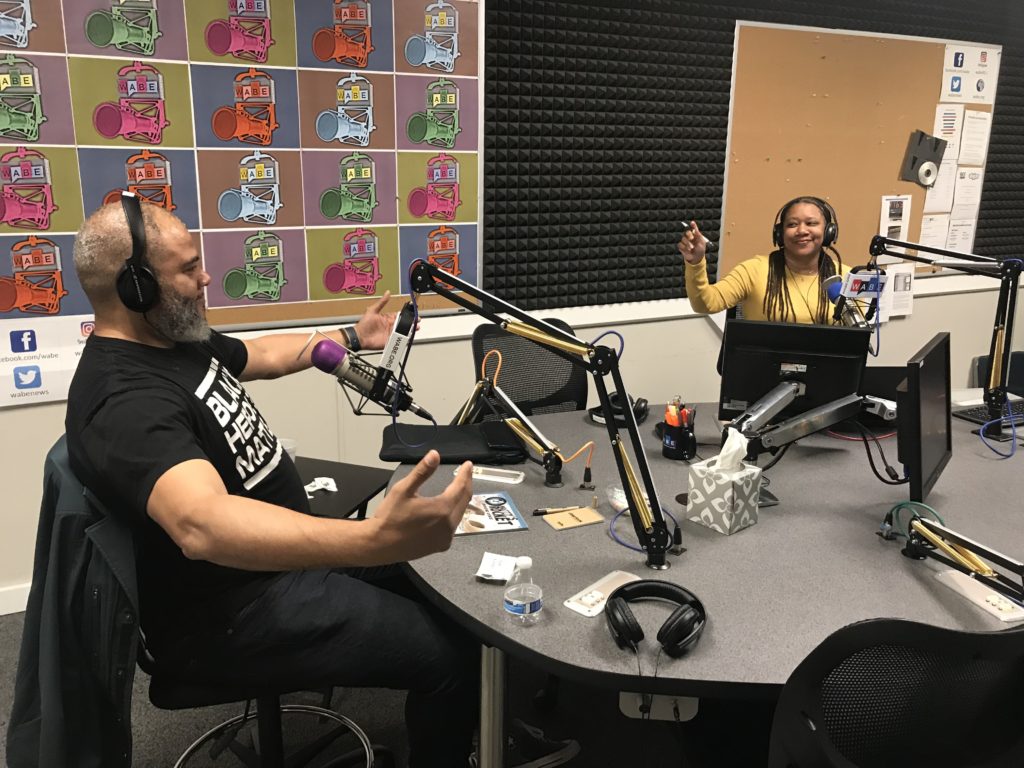 Scott is known for hard-hitting journalism on both the local and international scene.  She brought it and I barely hung on from her probing queries.  Bah…I LOVED EVERY MINUTE as can be seen below:

This was a fulfillment of the highest magnitude.  I’d like to thank NPR, Rose, and crew, and WABE for all of their wonderful support and attention. 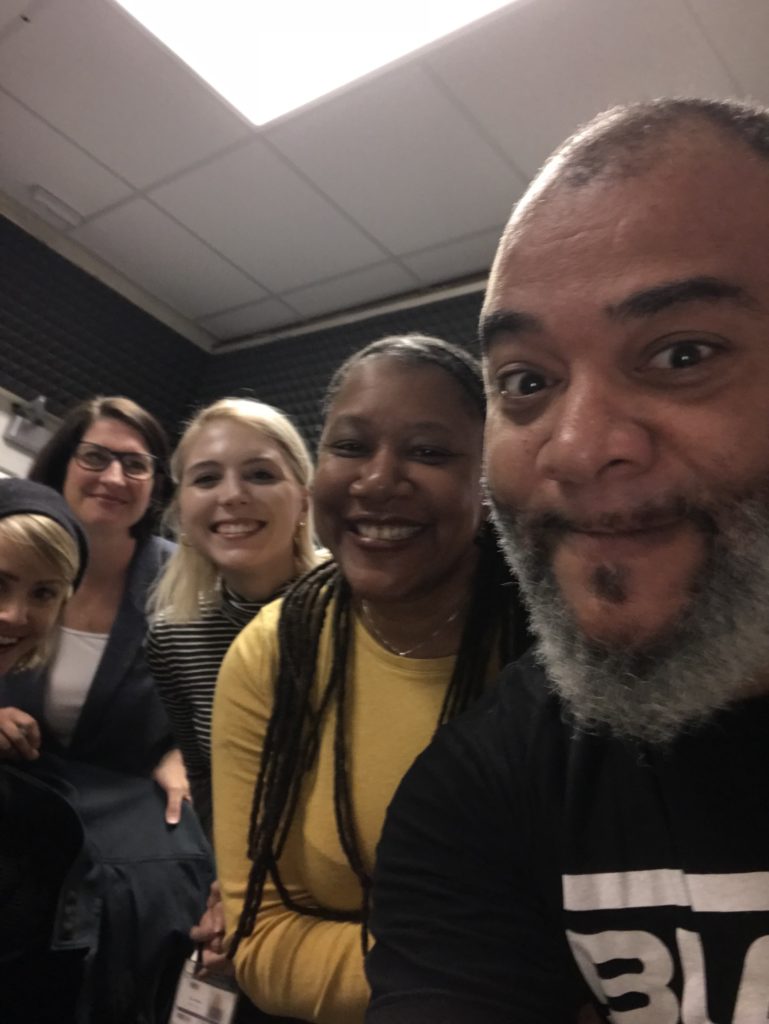